Home/Index
HOW TO ORDER
Payment Instructions

International Orders
Contact us
Home / Index Page
Thank You!
Tammy and I
Sincerely Appreciate Your Patronage 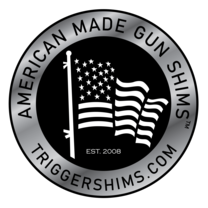 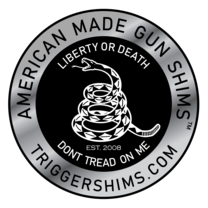 Rebellion Against Tyrants is Obedience to God

"America is the Greatest and Most Exceptional Nation in the History of the World..." D.J. Trump 45th POTUS

Video and Written Instructions
for installing our
TriggerShims 10/22 Shim Kit. 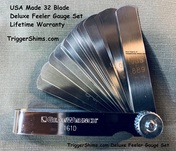 The easiest way to Measure your Trigger or Hammer assembly is with a simple blade type feeler gauge.
I sell a Nice U.S.A. Made set you can include in your orders.
It comes with a Manufacturers Lifetime Warranty
This 32 Blade Gauge will measure from .0015" up and is perfect for general use.
The price is $16.95 and includes Free Shipping

~ How to Install a Trigger Shim Kit ~

Remove magazine, open bolt and make certain there is not a cartridge in the chamber.
Allow the bolt to close. Familiarize yourself with the disassembly instructions and parts list in your Ruger Owner Manual. Click on thumbnail above for a full size schematic.
Loosen the Barrel Band Screw (B-69) and remove the Barrel Band (B-68)
Loosen, but do not remove the Take Down Screw (B-65)
Position the safety so an equal amount of the button is exposed on each side. If the safety is not in the middle when the barrel-receiver assembly is lifted out of the stock, the stock will be damaged.
Swing the barrel-receiver assembly upward away from the forearm of the stock.
Be careful the two Receiver Cross Pins (B-5) and Bolt Stop Pin (B-46) do not fall out.
Remove the trigger assembly by drifting out the two Receiver Cross Pins (B-5)
(see figure 1) 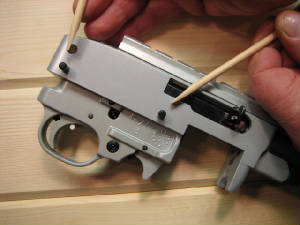 The 1/8" wooden dowel included with the shim kit makes a handy mar-proof drift.
Holding your thumb firmly over the top of the hammer, pull the trigger and release the tension on the hammer.
Remove the Hammer Rod (B-18) and Spring (B-44) assy, and set aside.
Notice the Bolt Lock Spring (B-42) around the right side Hammer Bushing, notice that the step on one leg of the spring is holding tension on the Bolt Release, and the straight leg is trapped under the ejector cross pin.
Remove the Hammer Pivot Pin, Hammer, Hammer Bushings and Bolt Lock Spring and set aside
(see figure 2) 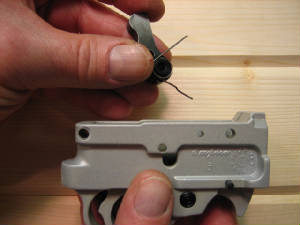 Now that you have the Hammer out, you can install an automatic bolt release.
I use and recommend the Volquartsen Automatic Bolt Release.

Hold the trigger housing in upright position and simply push from left to right
pin #B-35 ~ Mag Latch Pivot Pin, (see figure 4) just far enough to clear Bolt Lock, (#B-41).
Lift out Bolt Lock and slide VQ Auto Bolt Release into position.
Slide Mag Latch Pin (#B-35) back through holes into position.
At this point you can continue to remove Trigger/Sear/Disconnector assembly to install shims, or reassemble hammer, bushings and springs and reassemble trigger housing into receiver, and secure with pins (#B-5).
Be suse to check all parts function correctly before firing rifle. 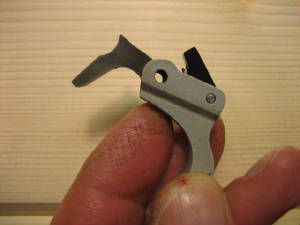 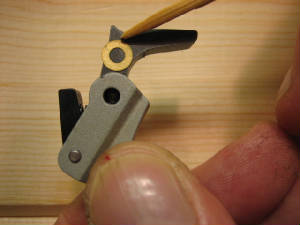 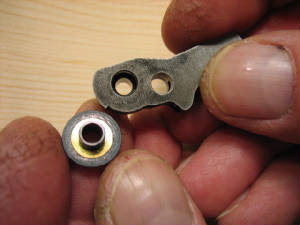 Now its quite easy to install the Trigger and Disconnector Shims
Slide the Disconnector Pin (KE02800 - bottom pin in Figure 7) slightly out one side, about 1/8 inch, just enough that you can install a shim, put a drop of gun oil on, slide pin back in to hold shim.
Now slide the pin out 1/8" the other way, and install a shim on the other side, and the disconnector is done!
The Trigger shims will install the same way, but first you will need a Cheater Pin.
We have included a 1/8 X 7/16 steel cheater pin in our kit, or a piece of 1/8" wooden dowel rod from the hardware store works well, you may have to sand it untill it is just under 1/8" so that it will slide into the Trigger and Sear, and cut it to 7/16" in length with a razor knife.
Slide the Cheater Pin in to hold the Sear (B-23), back it out 1/8", install a shim, (see figure 7) add a drop of oil, and slide cheater pin back to hold the shim, do the same with the other side.
Reassemble Trigger and Disconnector into Trigger Housing, don't forget Trigger Return Spring and Pin, and install Trigger Pivot Pin (B-21) at the same time forcing out the Cheater Pin.. Using the same method as installing shims in Disconnector and Sear, push the Trigger Pivot Pin out one side, about 1/8", just to clear and install a shin on one side.
Do the same to the other side, add a couple drops of gun oil, and you are done with the trigger!

Plastic Style or Universal Hammer Shims install Outside the Hammer Bushings, Between the Hammer/Bushing Assembly and the Housing
The Universal Hammer Shim will fit all styles of 10/22 Trigger Assembly's made
including the BX Trigger Assembly and both MIM Cast and 3 Piece Hammer sets because it is made to fit directly om the B-19 Pin ~ (B-19 Pin, see figure here ~ right )
On many late model guns, the Hammer Bushings are Metal Injection Molded (MIM) or Cast together as a one piece Hammer/Bushing Assembly.

Add a drop of gun oil and you are ready for re-assembly.
Install Hammer (B-17A), Hammer Pivot Pin (B-19) and Hammer Spring (B-44)
Be sure Bolt Lock Spring (B-42) is on the right side and the step-leg of the spring is on the inside bottom, (see figure 2) This end of the spring will engage with the Bolt Release (B-41), and the straight end will be trapped under the Ejector Cross Pin (B-35) when installing the Ejector. Further re-assembly is simply the reverse of dis-assembly.

It is of the utmost importance not to shim too tightly!
You will want some play, and no binding on any parts.

Check firearm for proper operation before loading with live ammunition.
If you are unsure about reassembly, see a qualified Gunsmith
~ You are solely responsible for the safe operation of your firearm ~

All Ruger rifles can be dry fired without damage, and dry firing can be useful to familiarize the owner with the firearm. However, be sure any firearm is completely unloaded before dry firing!

This Kit Will NOT Fit BX Trigger Assembly

If you are installing a Tuffer Buffer Recoil Buffer, click here for our installation instructions page.

Click Here for Customer Reviews of the 10/22 Shim Kits

Customer Testimonial
I ordered shim kit, hammer kit and several other items on May 13. As promised they were shipped out rapidly, and I received them fast. The quality is outstanding and the value is equally great. All in all a great pleasure to do business with you, and will return in the future. Thank you for outstanding service and quality.
Sincerely,
Joe in North Carolina

“It does not require a majority to prevail, but rather an irate, tireless minority keen to set brush fires in people's minds.” ~ Samuel Adams
BOX~ESU

SHIMS ONLY
$4 UPGRADE from ECONOMY SHIPPING
~ USA ONLY ~

MOST Shim orders under $50 DO NOT include Tracking and are sent in a
White Business Mail Envelope - Orders OVER $50 Include Free Tracking
You can Upgrade to USPS Mail Tracking on your SHIM ORDER for $4.00
This Upgrade includes a 6X9 Bubble Pak Mailer and USPS Tracking
(increases have driven our cost for Shipping and Packaging to almost $5)
THIS IS FOR SHIMS ONLY - ALL OTHER ORDERS Include this Upgrade


I manage this site myself, Please Report Any Website Problems to;
Lance at Webmaster@TriggerShims.com